For those who have played  15min Max (http://www.newgrounds.com/portal/view/641800) will be aware that the rooms in the game are spawned randomly, however, this is not entirely true.

With 15min Max we wanted to have a ‘random’ spawner for the rooms, but not entirely random, we wanted to have some kind of system in which you had to ‘unlock’ room Types in order to get other types.
What is meant by this is, in 15min Max, when you play for the first time, the only room types that can spawn are the‘JumpRoom’ & the ‘SlideRoom’. And after compleing both of them, you can unlock a new (random) roomType. This is more clearly explained in the image below. 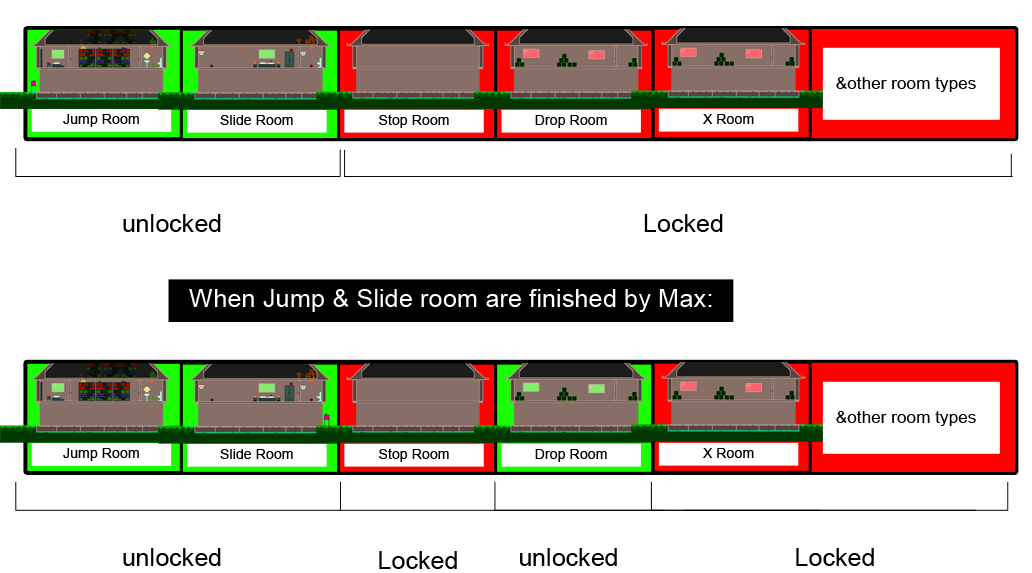 So besides that we have the unlocking system, we also have different ‘levels’ for rooms. This is done to keep the game interesting and to give the player a good challenge. So the way that the room levels work is that; each room has a ‘minimum room score required’ and a ‘maximum room score required’. The ‘room’ score is the amount of times that that room type has been finished by max.

But for the other room types, your score could still be 0, so that means that the spawner will only spawn a level 2 room for Jump, but not for Slide, Drop & others.

We also have an additional manual ‘level’ setting for the rooms. But I’ll get into that later.

Eventhough that the current spawning behaviour seemed to work pretty well, there was another problem. It was really hard to test certain rooms (for example if we wanted to test Jump 4 how would we ever do that?). So in order to solve this problem we made an additional spawner, which has the same basic behaviour of the original spawner but some behaviour is overwritten.

And the override spawner does the same as the normal spawner, but then you can select which ‘room type’ you would like to spawn and at what ‘level’ it should start. And when Max passes a room, the level is just counted up so that the same room is spawned, but with the next level. This is shown in the image below.

So that’s pretty much it for this post, In the next post I’ll go over some pseudo code so that you can get an idea of how this actually works. You can follow us on twitter: https://twitter.com/Duckbridge to stay updated on our next blog post